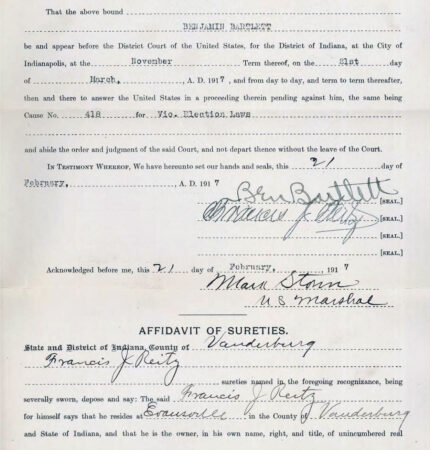 Each defendant (who was not released on their own recognizance) was required to post bond. What’s interesting is who posted those bonds—a who’s who list of Evansville’s elites including Mayor Bosse; Gus C Meyer, Vice-President of the Evansville Brewing Association and Sterling Products Co; Francis J. Reitz, President of City National Bank; Henry J. Karges, President of the Board of Public Safety and Treasurer of the New Vendome Hotel; Jacob Hartz, Manager of cigar and tobacco shops in the McCurdy and New Vendome Hotels; Henry Korff, Manager of the Bosse Coal Co; John Wimberg, Clerk of the Board of Public Safety; William Elmendorf, City Comptroller; and John Nolan, Postmaster of Evansville.