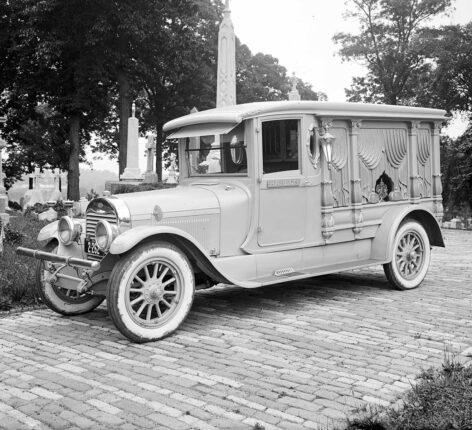 On April 16, 1919 police raided the home of Cal D. Pickerill, 114 Grant Street, and found 49 gallons of whiskey valued at $1,000. The liquor was brought from a Henderson wholesale house in a hired hearse which was seen driving down the levee to the Henderson Wharf boat. One of the Henderson police officers noticed it and became suspicious. “Hearses as a rule, when loaded, do not stop at wharf boats,” the officer reasoned. The hearse was unloaded at the river’s edge and the liquor put into a skiff. The Henderson police saw a taxicab waiting on the Indiana side. After the booze was ferried across the river, it was loaded into the waiting taxicab and then delivered to Pickerill’s house. Evansville police were tipped off by the Henderson police and advised to look out for a certain taxicab. The taxi wasn’t found until after the delivery was complete but police stopped the vehicle and took the taxicab driver, Clarence Graham, 719 Upper Ninth Street, to the police station where he implicated Pickerill saying that he received a nine-dollar tip. At his May 6, 1919 trial, Pickerill was fined $100 and costs and given a 30-day jail sentence.